There are examples of my work on the links below

I am a freelance lighting cameraman/editor with based in Cheshire. I have worked on flagship programmes such as The Cook Report in the 90's through to current news and network programes through the BBC in Salford and London, these include BBC Network News, Newsnight, BBC Breakfast and BBC North West Tonight. Other broadcasters include ITV News and Channel 4 News.

Experience in most kinds of camera formats, live links and PSC/ENG. I own a Sony PMW350 XDCAM EX High Definition camera and able to film at  50, 100 and 200 Mbs using my Nanoflash external recorder, I also own a Canon C300, a Sony PMW 200 and a  Canon 5D Mk3 DLSR kit. I carry a MacBook Pro with Final Cut Pro X and Final Cut Pro 7 and 4G Mobile so I can edit and send rushes by JEX to BBC. Living in the heart of Cheshire I am available to work throughout the UK and abroad. I also interview and self shoot and have worked on single and multi camera live OB’s for both BBC News, BBC Breakfast, BBC North West Tonight, ITV News and Channel 4 News. I also have experience with Live U. Mobile field editing is carried out in my vehicle.

PREVIOUS CREDITS AND LINKS TO PROGRAMMES

BBC Inside Out North West

Peter Bowker, the writer of BBC1's new drama From Here to There, reveals his inspirations

“The Queen and I”

BBC4 “A Writer’s Journey From There To Here”

BBC North West Inside Out

“The Village Behind the Scenes” 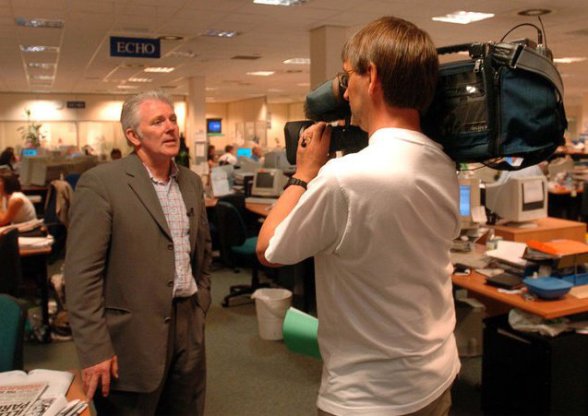 Where to find us: